Call us nowCall me back

Get a free call from our experts!

What Is A Door Latch Guard

You've probably heard about the old credit card trick to get in or other tricks to open a door without a key. You may even have tried to open a door with a credit card yourself. It’s quite popular in movies and TV series. However, if someone can do it with an improvised tool, you may certainly need protection. A door latch guard is an extra little feature that is used to protect the door from breaking in. It’s an inexpensive addition with a huge benefit. Latch guards for doors are pieces of metal that are put on the latch of your door to block access to it when it is locked. Being a simple device, a latch guard provides its owner with significant security. Sure Lock & Key is happy to answer your locksmith-related questions to make your life easier and more secure!

We already mentioned that a latch guard is a simple device. It indeed is. However, there are still a few details you may need to know before getting one. Let’s start with the most reliable ones and how they work.
If you are moving into a new home, you need to know what types of security door latch guards are installed on the front and back doors and if they are installed at all. Knowing all about the security of your first home locks is an important task and a huge investment into protecting yourself and those most dear to you. If you are installing a new exterior door, knowing the different types of door latches is one way to ensure you get the best price without sacrificing security.
In addition to being used on exterior doors, you can also use them on interior doors. For example, on bathroom doors to ensure privacy or on office doors so no one can see your confidential documents. Latch guards are perfect for securing places and rooms on a budget. 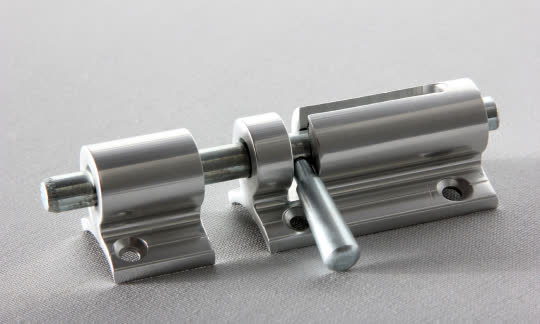 What Is Outswing Door

The outswing door latch guard is the most common type of latch guard. They consist of a single piece mounted on the outer side of the door to cover the visible latch or deadbolt.
Some swing door guards are equipped with a safety pin. The safety pin is inserted into the door frame and acts as an anchor, preventing an intruder from using a crowbar to remove the door from the frame to release the latch. That is especially useful for security in condominiums or apartments where building-grade materials have been used.
Thru-Bolt: Thru-Bolt latches are installed with flat-head screws, carriage bolts, or bolts and nuts. Regardless of the mounting method, an intruder will not be able to simply unscrew the bolts and remove the latch guard to gain access.
For screw-mounted latch guards, the mounting studs are welded to the back of the plate, so there is no visible point of attack. The carriage and floor bolts have smooth bolt ends, so there is no room with which to use a screwdriver.
Surface Mount: Another variety is surface mounted to the edge of the door. Corner latches of this type are usually not as secure as their through-bolt counterparts. However, they have a cleaner appearance once installed because the mounting hardware is not visible on the inside of the door. Another advantage is that the installation process is easy and does not require drilling holes in the entire door. Most do not require special tools for installation.

What Is Inswing Door

The inswing door latch guards consist of two parts, known as a U-Channel and a guard plate or offset strip. The U-shaped channel is installed on the front side of the door, and the offset bar is installed on the door frame. When the door is closed, the two parts join together to form a barrier that protects the latch. Many come with single-sided screws for added door security because they can’t be seen from the outside.
When installing a latch guard for a swinging door, it is important that the offset bar covers the screws that hold the U-channel to the door. 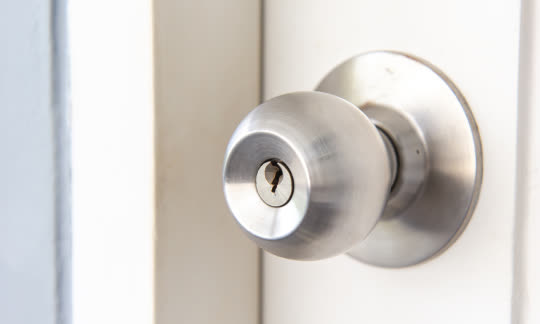 Call us to get a free quote

Installing a security latch on your door can help increase your security. These devices are very inexpensive and will fit any door. Of course, you must purchase the correct latch for your door, as they are not a one-size-fits-all solution. The type of door on which the latch guard needs to be installed will determine the type of protection.
Regardless, it will be an inexpensive solution that provides better protection for your entryway. By trusting a professional residential locksmith with latch installation, you can be sure that it will work properly. Sure Lock & Key is ready to help you. Whether you need a latch for one door or hundreds of doors, we'll provide the security you need.

The Anatomy Of A Door Lock

A door lock is an important invention. It first appeared thousands of years ago, and changed throughout history. Through the years we see sets of new functions, new improvements followed by new functions and new improvements, etc. and throughout these cycles there is never a new alternative that actually arises. Traditional locks were just that, traditional. They didn't change drastically - not until today. Today's locks are fundamentally different. Why? You ask. Well, let's start with the basic reason. Physical keys. The most modern locks do not use physical keys anymore. They are essentially keyless. The most simple keyless lock opens by pressing buttons with numbers or you can have a lock where you just insert a card and whalla it's open. No key needed at least not the ones we grew up with. Sure Lock & Key still sells and services the most basic locks and keys as well as the most high tech, leading edge, facial recognition locks. We’ve been in the industry for over 35 years and we will attempt to answer correctly any questions that are posed to us, regarding all Locksmithing and Security matters.

How To Change Locks On The New House Doors

Just moved to a new house? Thinking about the need of changing door locks? Sure Lock & Key, as always, want to be useful and helpful, so our highly qualified technicians will share professional information about moving tips with you in this blog post. Keep reading!

How to change a door lock cylinder

A cylinder is the core of the lock and the place where you insert the key. It is also the part that carries out the most important function that your lock was created for – protecting you, your loved ones and your assets. The cylinder has several pins that shift into place when you put a specific key inside. When people have their locks rekeyed, it actually means that they reset their cylinder.